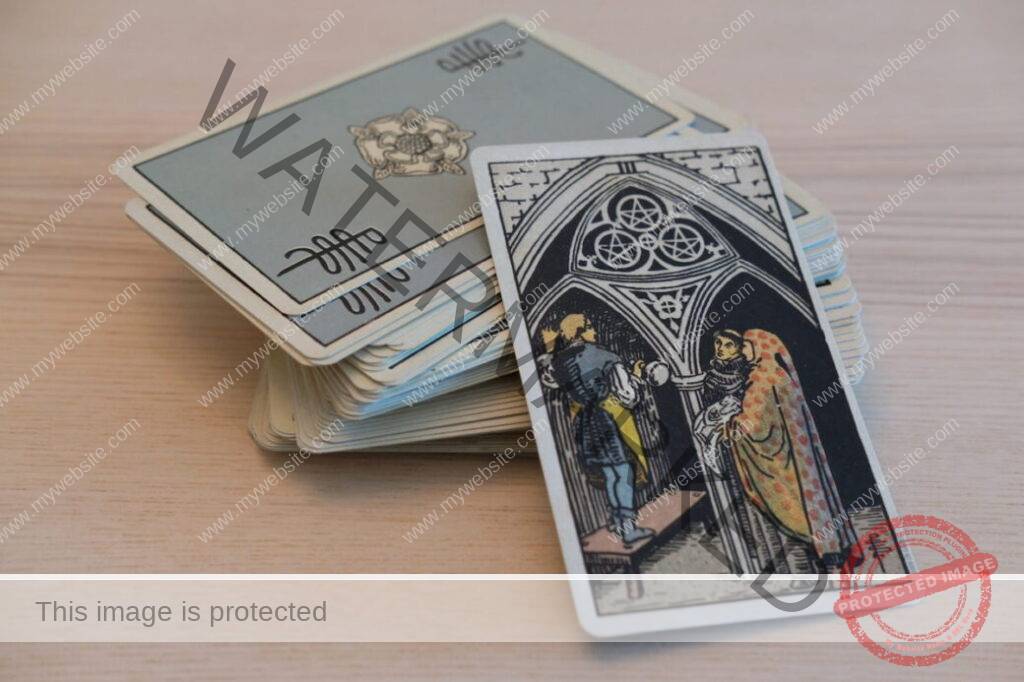 Three of Pentacles in the Tarot

DISPLAY MY BIRTH CHART
Three of Pentacles - Known as the Three of Coins to some, this card is about the search for money - which might not be there! You'll never know until you start the search, but who is helping you?

The Three of Pentacles, or Three of Coins, is about the search for missing money, which may (or may not) be there. The people in this card, created by Pamela Colman Smith in 1909, are a motley crew. A monk (who must have taken vows of poverty). A jester – who hardly knows much about accounting. And, someone who is in service to others – just look at the apron – so an employee, not an independently rich person. They are peering into the gloom with a sketch or drawing to guide them and the ghost of three coins hangs overhead – surely one-third for each of them?

Moving from Past, to Present, to Potential Future With Tarot

I work with the Before Tarot, After Tarot and original Smith-Waite Tarot, all of which spin Pamela’s original pictures in different ways. She was working at a time (1909) when scientists were making huge leaps with time.  It seems only fitting that today, with our new knowledge of quantum uncertainty – reality shifts shape according to our point of view and beliefs – that we should also be working with shape-shifting cards.

As you can see below, from left to right, the Before Tarot shows an ordinary person (middle-class average, no great wealth) glimpsing the promise of money hidden in a gloomy and mysterious space. He’s tempted enough to stop and consider a search even if there are no guarantees.

Working with Time and the Tarot – The Past, Present and Potential of the Three of Pentacles

In the middle card we are brought into the present – the now of the card you have just picked.  He’s now found a couple of people to help him. A diagram or map is in hand. Is it all hypothetical or have they found something that might just lead them to serious money or buried treasure? The only issue is – look who he’s working with. A jester and a monk. They are hardly financial professionals! Is this some kind of joke? Is this funny money? Or are they on the right track?

The ‘after’ card shows them getting closer. They’re within the inner sanctum now and the map is on the wall. The jester (joker) is tracing it with a pen while the monk looks on, slightly removed from it all. The working person who started the search seems frustrated, pent-up, ready for action – not more theories! What are these cards saying to you? Three of Pentacles in Before, After Tarot (Adams)

Seeing the Three of Pentacles Through Pamela’s Eyes in 1909

When working with the deck created by Pamela Colman Smith under guidance from Arthur Waite, we need to look at life as it was around 1909 when she picked up her paintbrushes. This was a couple of years after a new edition of Treasure Island had made its way into the shops. This is a 1907 copy currently being sold on eBay for rather more than the original price. You might call eBay a quest for money (money to be saved or made) but there is a mysterious quality to it – none of the prices are known factors, until you look. Treasure Island is of course a book about the search for hidden wealth. Everything hinges on that map – but also the abilities and intentions of those looking!

When you draw the Three of Pentacles/Coins you are being asked to look deeply at the motives of the people you are recruiting. Look at their experience and expertise too. Do you consider yourself the protagonist in this story? Are you the regular, middle-class or middle-income person with the apron or uniform, who is obviously not of wealthy stock? Maybe you would consider yourself to be the joker/jester figure. A funny person; an amusing person; an entertaining person. Yet, how good are you with that other side of your brain?

The monk figure in the card is another puzzle. Pamela drew a cathedral in her original illustration of the Three of Pentacles so it makes sense to have a holy brother in the frame, with his simple robe, shaven head and sandals. Yet – why is he looking for money? Does he have a claim on it, through the location or institution? Questions like this can help you dig deeply into the meaning of the card. Perhaps Pamela was influenced by Treasure Island!

The Panic of 1907 and the Business World

The Panic of 1907 was just two years into the past when Pamela was asked by Arthur Waite to illustrate the Tarot in a deck he hoped would be a solid seller in Christmas 1909. A magazine from that era, Puck, shows the nervous atmosphere on Wall Street that year. As a leading figure at Horlicks in Britain, Waite would have been well aware of the ruckus across the pond two years before their Tarot cards emerged. The themes of looking for money and recovering lost funds and tracing the missing millions and searching for shares are common with the Three of Pentacles. Pamela and Arthur lived through it. Both had connections to New York. He was born there and she studied art there.

In 1909, when Pamela’s cards appeared on sale for the first time, Countess Beatrice Forbes married. Her wealth, and that of her husband, were talking points in newspapers and in high-society magazines throughout the year.

Pamela was creating her Tarot at a time when inequality meant that the gateway to wealth for a woman was often solely through her inheritance (from her parents) or from the added benefits of marrying money. Thus, the Three of Pentacles/Coins may be about three sons looking for their mother’s legacy, or perhaps three brothers or cousins on a quest for their share of a family fortune. Today, we associate this card with missing superannuation or pension funds, taxation refunds and also the recovery of debt. If you are curious about the astrology in your chart which may be pointing to this, have a look at anything in Taurus in your Second House and Scorpio in your Eighth House.

Using Astrology for Timing With the Three of Pentacles/Coins

If you were born in the Sixties, for example, you have have Neptune in Scorpio in your Eighth House, natally – using the Natural House system. So, the idea of mystery and money is woven into your life! Perhaps you are having transits to natal Neptune when this card comes up. If you are looking for specific timing with the Three of Pentacles/Coins, it can be useful to have an idea of the transits of Uranus (going through Taurus for many years) which may be aligning with your own Taurus placements in the Second House of cash flow, bills, debts, banks, shares, business, charity, assets and so on. You can use your personal birth chart, if you  are a Premium Member, to get a second opinion on what is actually unfolding (and how good your chances are) when the Three of Pentacles comes up. If you are fortunate enough to have Jupiter in Scorpio or Taurus, for example, it may well be that there is a lot of money waiting to be discovered and even if the search party isn’t exactly a crack team of financiers, you may well hit gold. Now, how to share?