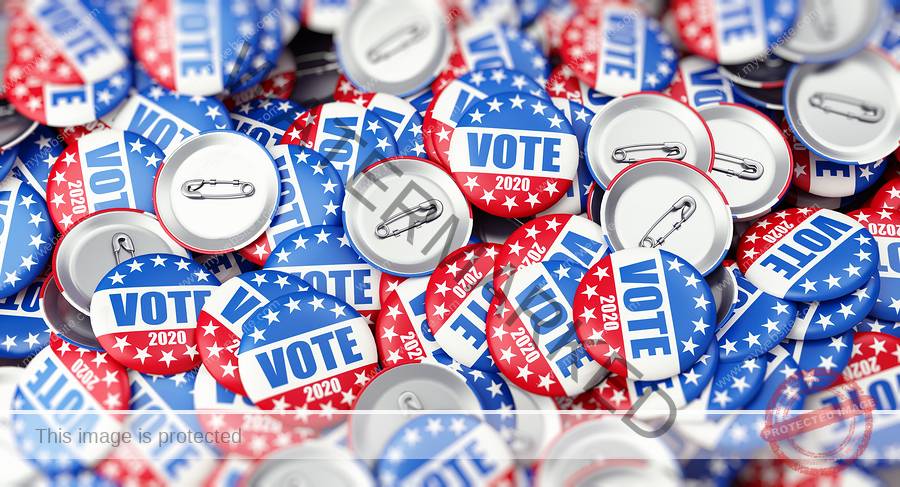 DISPLAY MY BIRTH CHART
Who will the President of the United States in the 2020 Election? There is a pattern showing up in the Republican (Grand Old Party or G.O.P. horoscope) which is worth watching. First posted on March 24th 2019, this feature has been updated to include January 2020 polls for Mike Bloomberg./

The Astrology Chart of the Republican Party Astrologers don’t watch the charts of Donald Trump or Bernie Sanders any more – or Hillary Clinton. Why? It’s called ‘Dirty Data’ in the business and it means we don’t have confirmed time, place and date of birth from the person concerned.

What does work really well, though, is the astrology chart of the Republican Party or GOP (Grand Old Party) and it shows up for Trump, the resignation of President Richard Nixon, the assassination of Abraham Lincoln and the Reagan years – the Eighties.

What we are seeing in the astrology of the US Election 2020 (as I add to this story on January 28th, 2020) is a huge turning of the tide away from the super-rich, staying super-rich – and the rest of America experiencing a tax revolution, which benefits them. So that’s not the Trump Republican government. Not without some massive transformation. Why the arrival of Robin Hood thinking in America for the 2020 Election?

You don’t need a lot of complicated astrological techniques for this. It’s really simple. Uranus (revolution) in Taurus (taxes) for the first time in most people’s lives. Add the Aquarius weather of 2021 (Jupiter and Saturn in Aquarius) and we’re talking a radical levelling of rich and poor. Aquarius does not do privilege. So, this isn’t Trump. Not without some massive shift!

Without reliable birth data for the majority of these people it’s impossible to single out a leading face for 2020. Yet, the astrology of the actual parties says ‘Robin Hood thinking.’ Not so much stealing from the rich to give to the poor in America, but having the super-wealthy hand out, and share.

That could be anyone from Bernie Sanders, who has radical policies on the super-rich – to Mike Bloomberg, worth billions, and a well-known philanthropist.

Donald Trump has famously supplied two completely different birth dates to the authorities so there is no point in running his chart. Perhaps there never was. He’s impeached, which the astrology predicted (to the day). We really should not be too distracted by the man over the party – but if you want to see date-stamped, true astrology forecasts about Trump, take a look here, as they go all the way back to 2017. And they work up to two years ahead.

The Republican Party Horoscope to Watch in 2020

There has always been a difference of opinion among Republicans about where the party was founded and when. It is neatly summed up in this story in The Chicago Tribune.

Did it all come to pass on March 20th, 1854, in The Little White House in Ripon, or are we talking Exeter?

Testing the rival charts Exeter is a clear winner when it comes to back-prediction. The fact is, on October 12th, 1853, at Major Blake’s Hotel, 14 men agreed with Amos Tuck that their new political party should be called ‘Republicans.’

This makes the Republican party a Libra – it was founded with the Sun in Libra. This is the sign that rules equality and as the party originally began by pushing back against slavery, that’s a fit. There is something else though. And it’s going to be hugely important when Americans vote in 2020.

It would be lovely if ‘the little White House’ or ‘the little white schoolhouse’ we see below really was the birthplace of the Republican Party but the astrology chart fails to add up. It shows almost nothing when Abraham Lincoln is assassinated or even when Donald Trump shocks the world and becomes the President of the United States. (Image below: Wikimedia).

The Fated Pattern in the Republican Astrology Chart

The G.O.P. was born with this astonishing pattern, which might explain why it goes from extreme victory to total defeat in such dramatic cycles. According to all the laws of astrology it’s going to have to produce miracles in 2020 to reclaim power.

This is an extreme collection of horoscope factors which all line up around the same position in the chart. Everything chimes at 11 and 12 degrees. (By the way, if you also have patterns around 11 and 12 degrees in your birth chart, it may be that the United States has a powerful influence on your destiny, and in some way you play your part in the nation too). If you are curious about that and you are a Premium Member, take a look at your chart for 11/12 patterns.

You can check your horoscope here to see if your destiny and America’s are entwined, especially in times of great change.

What Happened Under Lincoln, Nixon, Reagan and Trump?

Donald Trump was elected with Jupiter, the planet of breakthroughs, opportunities, luck and solutions at 12 Libra. Richard Nixon stood down with Saturn, the planet of difficulty, at 13 Cancer, alongside Ceres at 13 Pisces. Lincoln was assassinated with Pluto at 12 Taurus and Mercury at 13 Taurus. In the Reagan years (the Eighties) we find he comes to power on his first term with Jupiter at 10 Libra and Chiron at 13 Taurus, timed by Mercury at 12 Scorpio and the Sun at 11 Scorpio – and in the second term, from victory, past Electoral College, into inauguration, with Ceres at 12 Taurus and Uranus at 11, 12 Sagittarius. That’s a pattern. Triggers to 12, 13 degrees in 2020 suggest a family crisis for Trump in February this year, followed by a downfall in October. Beyond that in 2021 we are seeing a completely different kind of politics. As I’ve said, it’s Robin Hood.

Who Wins 2020 According to Astrology? The problem with predicting American elections is primarily the unreliability of the birth chart information. Clinton and Trump have been surrounded by questions since 2016. Bernie Sanders has X-rated data according to the Rodden Rating System set up by astrologer Lois Rodden.

Beyond that, Trump is impeached. So he’s your source of true facts on his own birthday and time.

What we can do, however, is look at the chart of the GOP and also at the ‘weather’ in 2020 and beyond. Which way is the wind blowing? Well, the climate change is Aquarian. Jupiter and Saturn go into Aquarius, the sign of diversity, community and equality in December 2020. In 2023, Pluto follows. This draws in a new generation of voters – a demographic born with the outer planets Uranus and/or Neptune also in Aquarius. This is not the G.O.P. which is about big power and big money from the top down – not the levelling Aquarius requires.

Aquarius has long been associated with the whole human family as equals, regardless of age, colour, race, gender. This is a Mini Age of Aquarius. The party which wins, will be the party which sells that message best and presents a diverse spread of candidates who represent the United States with all her differences.

Is that the Republican party? It really depends on who pushes to the front of the pack for 2020. Nobody has seen this Aquarian pattern in their lifetimes. Aquarius the Water-Bearer takes its symbolism from the real ‘Aquarius’ of Ancient Rome who supplied the communal water to the famous bath complexes, where all ages, genders, classes, races, ages bathed together. This new ‘weather’ in America is very, very different to anything the country has seen before.

Trump is in astrological trouble. He’s in trouble in the real world, too, as Nancy Pelosi fulfilled the destiny predicted for her in astrology, two years before it happened – on the day it happened.

Never mind his dubious birthdate. He’s a symbol of Pluto in Capricorn. An archetype of power, wearing a suit. We’re seeing major patterns in 2020 that suggest there is a take-down, come-down and downfall coming.

You’ve seen how the Republican party was founded with Uranus at 11 Taurus. You’ve also seen how major events like the resignation of Richard Nixon happened with Saturn close by at 13 Cancer, and the tragic assassination of Abraham Lincoln took place with Pluto at 12 Taurus.

What happens when Uranus goes across 10, 11, 12, 13 Taurus will be an historic shock to the GOP and it will involve the values at the heart of the party. Its principles and ethics, based on its economic code and business interests – which Taurus rules.

The Republicans are in for a revolution which will permanently change the party between July and September 2020, and more critically, April 2021 to June 2021. The end game is October, November, December 2021 and January, February, March, April 2022. I am looking three years into the future here but between April 2021 and April 2022 the GOP will experience the biggest change it has seen in decades and it will not be the same party afterwards.

Karma for the Republican Party in Astrology

Karma also comes for the GOP when the North Node goes across 10, 11, 12, 13 Cancer and the South Node goes across 10, 11, 12, 13 Capricorn. This happens all in one month. October 2019. The Nodes move backwards in cycles of around 19 years, so this stretches right back to the era of Lincoln, Nixon and Reagan. What goes around comes around for the Republican party in October 2019 when karma calls. *Note: This prediction was made on 24th March 2019, and in fact it did come to pass – Nancy Pelosi made her move for impeachment in September, one month before.

Ceres in the Republican Horoscope

The extremes of that pattern at 11 and 12 degrees are repeated in January 2021 when Ceres goes across Pisces 10, 11 so that is certainly a statement about the F.B.I. and the C.I.A. which Pisces rules (undercover, under the radar, below the surface).

For more on this, you really need to go back to another prediction which astrology called here, about America’s secrets – which also came true.

This is a really strange election. It reminds the G.O.P. that they came from equality – the push back against racism – in favour of the levelling of America. What we’re going to see in November 2020 and across 2021, 2022, 2023, 2024 is a massive financial levelling. The gap between super-rich and super-poor in America has become so extreme, the astrology says – only one party is going to win this. Now, if we only had AA-rated birth data for Bernie Sanders, Mike Bloomberg, Elizabeth Warren and Joe Biden! One thing’s sure though. Robin Hood wins this.