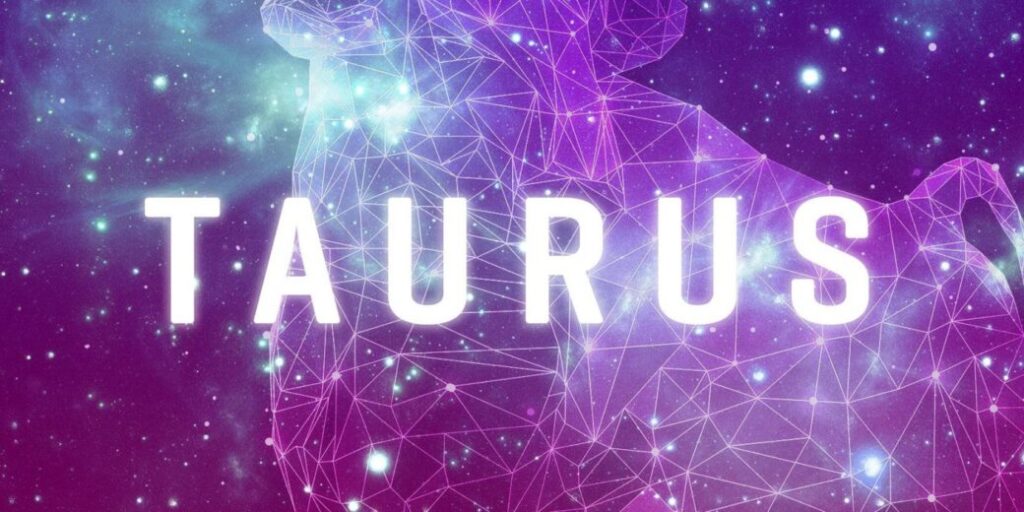 From May 16th 2023 until May 25th 2024, Jupiter and Uranus will both be in Taurus, the finance sign. This is a rare money cycle for you when you will be given opportunities to benefit enormously from sudden changes around you. Jupiter and Uranus in Taurus is what the world needs as I write this on 18th December 2022.

Looking a year or two into the future, astrology says you will gain. If you need help, you’ll get it. If you are in line for enormous profits, a windfall or big bargains – they are coming.

Circle April 2024 in Your Diary

Circle April 18th-26th 2024 in your diary as a time to make or save a lot of money. On those dates we will see a Jupiter-Uranus conjunction at 21 Taurus and then 22 Taurus.

If you have anything in your chart at 21 or 22 Taurus, Virgo, Capricorn then you are in luck then, as the ripple effect of other people’s financial gains, spreads out to you, helping your career, academic career or unpaid work (you may be hired or promoted). People may invest in you. There could be a boom in your field.

Jupiter is about opportunity. Uranus is about liberation. Put them in Taurus, the sign ruling wages and salary, and we will also see a repeat of a 1941 cycle that put male wages in women’s hands. (Images: Wikimedia). 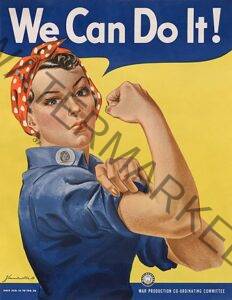 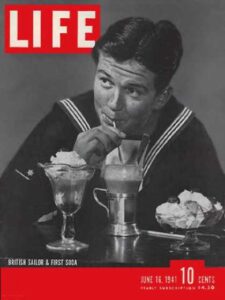 The last time we saw this cycle in 1941 in Australia the ACTU pushed for equal pay for women because they were doing mens’ jobs. By 2024 women will get it. 1941 was also the year of Rosie the Riveter. Women were forced to work in male careers in 1941 because their husbands were at war – and earn a wage.

As every Jupiter cycle always moves the story forward, we would expect governments in several countries to introduce legislation for equal pay in 2023-2024.

Male or female, if  you have anything in your birth chart at 21 or 22 Taurus you will profit or gain, if you take the opportunities which come out of the blue, then. The biggest and best financial opportunities and the most liberating new changes are coming.

I was chatting to my friends Imogen Edwards-Jones and Sarah Vine about this, in December 2022, for Sarah Vine’s Femail Half-Hour at the Daily Mail.

We will see Universal Basic Income introduced into several countries. Called UBI for short, it is an obvious outcome of this Taurus conjunction, but also Pluto in Aquarius, the great leveller of rich and poor.

One world currency will also be here for the same reason. This is an unusual, radical, historic cycle. It won’t be Bitcoin. Expect a new digital coin.

We will also see tax reform by May 25th 2024 which stops the greed at the top. Finally, there will be money laundering arrests which result in the seizure of billions of dollars/pounds worth of assets, to all our benefit.

Taurus in Your Chart

Taurus in your chart, where we find problem-solving Jupiter and liberating Uranus, rules your Second House. If you have anything at all in the zodiac sign of Taurus, then Jupiter will pass over it.

You can expect some or all of the following  on this list to occur, on a grand scale. Jupiter does everything in a big way. In astronomy he is a gas giant. He is associated with expansion, growth and booms. Jupiter is always shown with a thunderbolt in his hand by the Romans, who considered him ‘Optimus Maximus’ – the greatest and best of the gods. The dramatic, magnificent ‘boom’ sound of thunder is a good way to think about what is coming for you as Jupiter slowly but surely forms transiting conjunctions, with Taurus factors in the Second House of your chart.

Are you  Aries or Libra?

You are the two luckiest signs of all, as Jupiter goes into your Second House of personal income (Aries) and Eighth House of joint income (Libra). You will save or make a small fortune by May 25th 2024.

We will see a new US world trade deal in 2023-2024 which benefits Britain. This time around, China and Russia will be treated differently in the deal. Jupiter and Uranus in Taurus put America at the centre.

Cheerful News for the Economy

Cheerios were invented on this cycle, but cheerful news also arrived in America with the end of the Great Depression in 1941. Finally,  unemployment dropped and output went up.

In 1941, the last time we saw this rare cycle, the world’s first working general computer arrived. It was called the Z3. Watch for lucrative new investments when Jupiter and Uranus are in Taurus.  Jet planes arrived in 1941. Uranus has always ruled new inventions. Jupiter rules potential gain. Watch what arrives by 2024. Jupiter and Uranus in Taurus are certain to bring the distant future into the present. Should you invest?

Look at the blue highlighted dates below. Thursday 18th through Friday 26th April 2024. I am always asked about lucky dates. Well, here they are. Mercury Retrograde is here too, which suggests rapidly changing prices on sharemarkets worldwide and an exciting, unpredictable time for shares when bargains can be bought and resold. You will need your own chart to see if this applies to you. This feels like a gigantic global jumble sale.

Let’s leave it there. But do take a closer look, as we peer two years into the future…This is an Ephemeris for April 2024 supplied by one of my favourite astrology websites, Astrodienst. 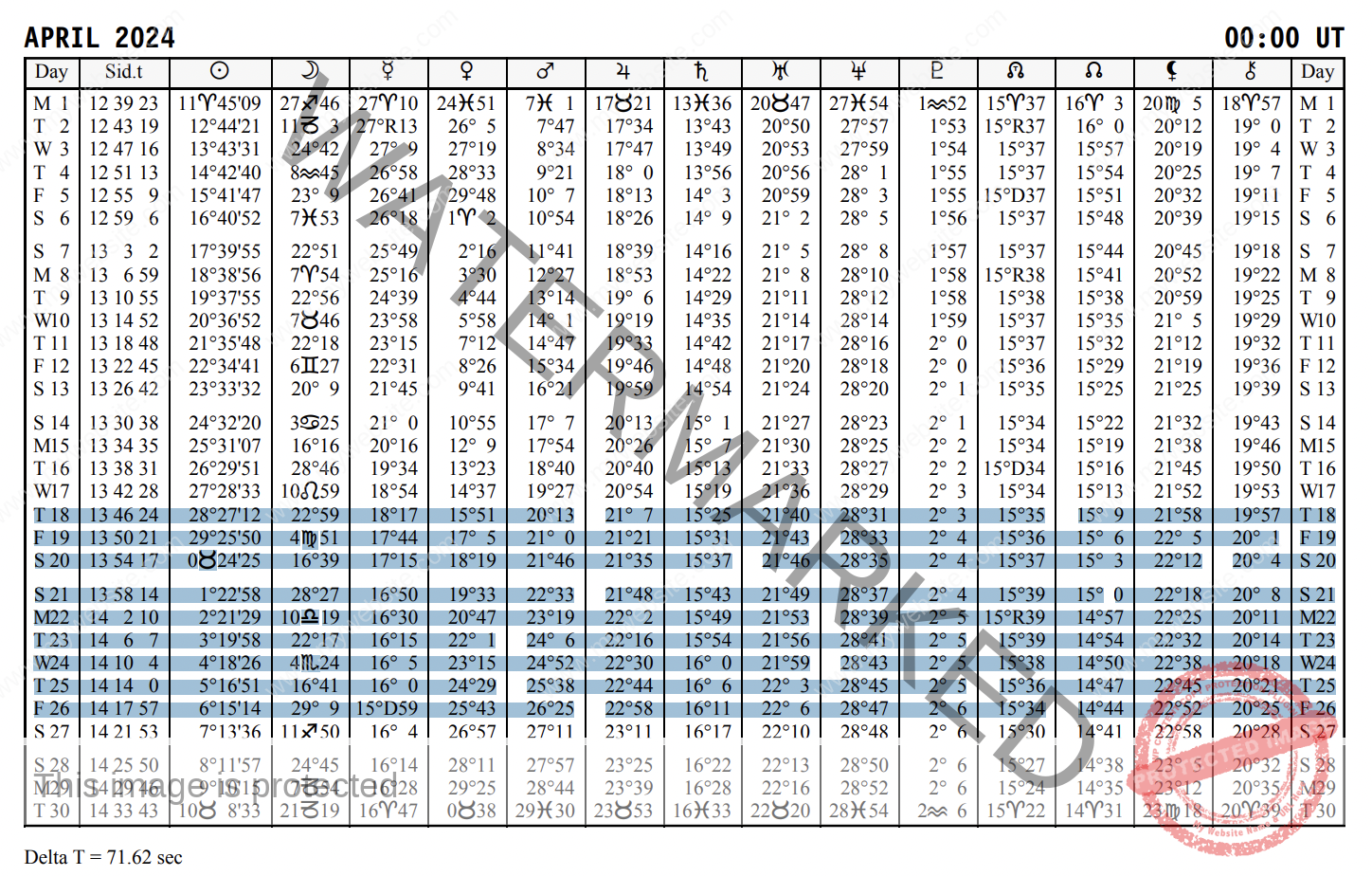