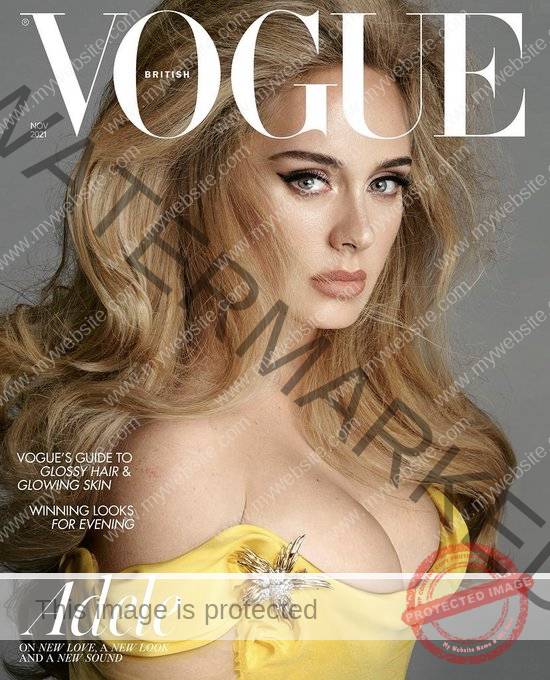 DISPLAY MY BIRTH CHART
Adele's interest in astrology first came to our attention when her Saturn tattoo was reported on by The Daily Mail in 2019.

Adele and Her Saturn Return

Adele’s interest in astrology first came to our attention when her Saturn tattoo was reported on by The Daily Mail in 2019. “Adele adds to her collection of tattoos with a new Saturn inking on her forearm ‘as a tribute to son Angelo’ following split from Simon Konecki.”  the paper reported.

A photograph clearly showing Saturn with his famous rings, has circulated among Adele’s millions of fans on Instagram and Twitter ever since (below). Her face says it all. Saturn Returns make you stronger. Even if life becomes black, white and shades of grey for a while. People who go through their Saturn Return always come out on the other side, with more strength. Wisdom. 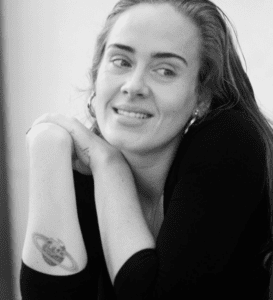 Saturn is the planet of hard times, big learning experiences and reality checks. The Saturn Return usually comes around as you exit your twenties and go into your thirties, so it is associated with maturity. The real entry into adulthood. Forget the idea that you are supposed to be an adult at age 18 or age 21. In astrology, we think about 28-29 as the entry point.

Adele has been through a very public break-up and  dramatic weight loss since her personal Saturn Return (when Saturn returns to the same zodiac sign and degree it occupied, at your birth).

These are classic outcomes of this famous event in astrology. The Saturn Return can bring divorce but also a dramatic drop in dress size. You might say Adele’s experience is textbook. Other common Saturn Return outcomes? A job change. A mortgage. A baby. Saturn Returns can also be intensely personal and reach into life experiences that usually end up in the professional astrologer’s inbox. They can be complicated, sensitive and yet – the making of you. Adele experienced her Saturn Return in Los Angeles, which is why it is also at the centre of the tattoo.

We have B rated birth data for Adele, from a biography held at Astro.com. The information comes from Adele by Sean Smith (HarperCollins, 2016), which shows Adele’s horoscope with a time of 8:19 am on page 260. So, what does Saturn tells us about Adele Laurie Blue Adkins, born on 5th May 1988 at 8.19am in Tottenham? She has Mercury and Venus in Gemini. Gemini is the zodiac sign to associate with singers and singer-songwriters. Sir Paul McCartney. Paul Weller. Noel Gallagher. Morrissey. Adele also has the asteroid Apollo in Gemini. This is the sign of the twins, and people born with this sign prominent in their horoscope usually go into a duet or two-person act, during their careers. They find their ‘twin’ soul for a time. The singer is famously a Taurus (the sign ruling the throat) but the Gemini twist in her chart suggests dynamic duos. Kylie Minogue, for example (who is strongly Gemini) had a duet with Nick Cave. Paul McCartney has had several duets. 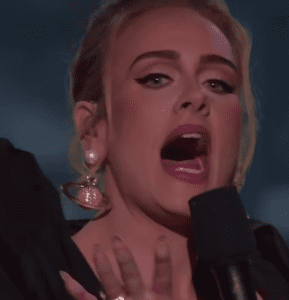 Adele was born with Saturn at 2 Capricorn and an exact pattern with Ops at 2 Leo in the Fifth House of children. That’s quite unusual.  Uncannily, Ops was married to Saturn in the original myth and had his babies. This rare astrology pattern (called a Saturn-Ops Quincunx) was triggered on her Saturn Return, which took place on January 7th-14th 2018, then from August 14th-September 30th 2018, making the year 2018 officially one of the hardest years of Adele’s life.

During her special with Oprah Winfrey, Adele One Night Only, the world’s number one singer wore Saturn earrings, with her tattoo of the planet also on show. This photograph (left) attracted huge interest when it went viral on Twitter, with fans either wanting to know what the planet in question was, or where they could buy Adele’s Saturn earrings on Oprah Winfrey’s special. Stylist magazine had the answer:

“For the intimate sunset performance, Adele, sported a striking off-the-shoulder custom Schiaparelli gown, which she accessorised with Saturn-shaped Vivienne Westwood orb earrings, a nod to the star’s belief in the Saturn return. Teasing the performance on social media, Adele posted videos and photographs to her Instagram page with the subtle captions of Saturn planets. While earlier this year, after announcing she’d transitioned through her Saturn return, she discussed having an image of the planet tattooed on her arm, which was also visible during the gig.”

“Adele first mentioned the Saturn return in a candid Instagram post from October last year, where she admitted she’d been through “the most turbulent period of my life”, with a friend then dispensing the advice that “It’s your Saturn return, babes.”

The Saturn Return is sometimes unforgettable. It really depends on your natal chart, but if you have Saturn at the same degree as any other horoscope factor, there is a fated pattern which can unfold. It did for Adele, and it was about success, status, ambition and career (Saturn in Capricorn) and the challenges of marriage and motherhood (Ops in Leo). Taurus Adele also spoke about her Saturn Return in her VOGUE Interview

How to Handle Your Saturn Return

If you know that Saturn is about to cross over the same zodiac sign and degree that you were born with (in November and December 2021, that will be Saturn at 7, 8, 9, 10 or 11 degrees of Aquarius) and particularly if you have other factors at those same numbers – you need to know the Saturn Rules. By the way, this planet comes back about every 28/29 years so you can be much older, going towards your 60th birthday, and also have a Saturn Return. 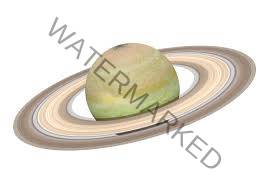 1. Find out when your Saturn Return will actually be over as it helps to have a date of release, to look forward to. The rings around Saturn resemble walls, or a moat. At some time in the cycle, you will have permission to climb over the walls and break free, or go across the moat, into new space in your life. If you have your natal chart you can find out when – to the last date – you can go over the walls or the moat.

2. This horoscope symbol in the astrology is about learning the hard way, taking your time and patiently taking heavy lessons on board. Saturn looks pale in the sky, as you can see in this image from Unsplash. We often emerge from a Saturn Return looking more pale than usual – it’s quite true – as we can lurk indoors, even in the summer, or circumstances might take the usual roses out of our cheeks.

3. Saturn Returns are commonly associated with the need for more sleep, more rest and more self-care. We don’t know specifically why Adele has an image of Los Angeles inside her Saturn tattoo, but we do know that when she talks about being unhappy, in this interview with VOGUE,  below, she’s also talking about classic Saturn Return reality checks. It can be a very demanding time. (You can see the Saturn tattoo through her sheer blouse sleeve). To find out more about Adele’s latest work, see this feature in The Independent. For more on Adele’s VOGUE interview, and to see her stunning photo shoot and covers keep reading here. 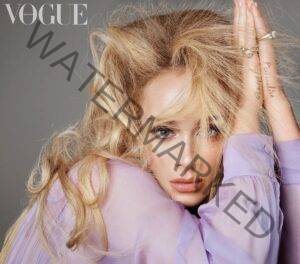 “Then I hit my Saturn return,” Adele says, flipping up her left wrist to show me a tattoo. It’s Saturn, the planet, with a drawing of L.A. in the middle. “It’s where I lost the plot.” It takes 27 to 32 years for Saturn to fully orbit around the sun and return to the position it was in when you were born, Adele explains. “When that comes, it can rock your life,” she says. “It shakes you up a bit: Who am I? What do I want to do? What makes me truly happy? All those things.”She does not blame her divorce on her Saturn return, but that was one result of it. “I was just going through the motions and I wasn’t happy,” she says. 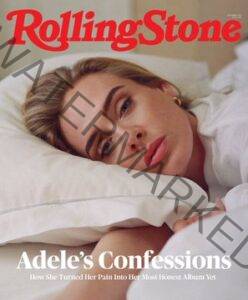 From an in-depth interview about 30 in Rolling Stone:

“Rumours and assumptions spread like wildfire, but the reality is that there were no heroes or villains in her divorce. Konecki was a good husband and continues to be a great father to Angelo. He’s still one of Adele’s best friends, even texting her memes while she and I are together. Instead, the end came with the heartbreaking, if less dramatic, feeling that she was getting further from the person she hoped to be.”

“I didn’t really know myself,” she says. “I thought I did. I don’t know if it was because of my Saturn Return or if it was because I was well and truly sort of heading into my thirties, but I just didn’t like who I was.”

Turning 30 After Your Saturn Return

Adele isn’t the first singer to explore the Saturn Return for inspiration. Turning 30 is a milestone anyway – the end of your twenties, for better or worse. To analyse what will happen (or what happened, in your past) look to Saturn’s sign and house in your natal chart and that will show you the main story. Then, look to any exact patterns (aspects) involving Saturn, which reveal the chapters in the story. Adele’s Capricorn Saturn was about her mission, position and ambition. That changed – because it had to. If you are curious about your own Saturn sign and house, you can search further on this website, or seek out Liz Greene’s classic book on the planet, Saturn: A New Look at an Old Devil.